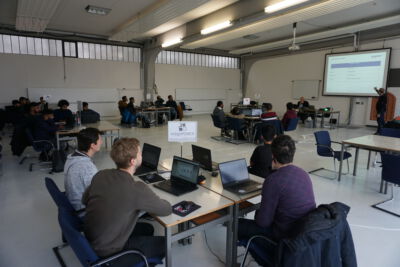 At the end of the year, the Smart Energy Systems students of Campus Feuchtwangen participated in the two-day simulation game workshop EnergyNext. The aim was to combine theoretical lecture content with knowledge imparted in the seminar in the fields of power plant operation, energy trading and sales.

“We have been using EnergyNext at Ansbach University of Applied Sciences for years both in the bachelor’s program “Energy Systems and Energy Economy” and in the master’s program “Energy Management and Energy Technology. ” The simulation game is highly demanding and uniquely connects the previous knowledge conveyed in lectures and seminars. From brain research, it is well known how important positive emotions are for successful learning – and these are precisely what you get here”, says Prof. Dr. –Ing. Georg Rosenbauer, lecturer for the module Energy Systems and Energy Economy in the master’s program Smart Energy Systems. “It´s moving me how the experienced team of coaches manages to accompany the groups individually each year through complex and sometimes personally challenging game phases and lead to a shared enthusiasm and justified pride in what they have achieved”, Prof. Rosenbauer continues.

Divided into six virtual energy companies, the participants competed against each other and tried to lead their company to success. The challenge here lay in the interaction of the team members, the control of buying and selling, and the response to different market signals.

Who wins the most clients?
During the simulation game 15 years of the energy companies are experienced. In the role of managers, the students must react to changes in the regulatory and economic framework and ensure future-oriented power plant operation. This includes not only economic action in the electricity market and tactical negotiations with the bank, but also lobbying the government. Ultimately, however, the customers gained determine who can generate the highest profit. However, the future is not always predictable. . .

Fukushima and climate change
Unpredictable for the fictional companies, the EnergyNext government reacted to the nuclear disaster in Fukushima with a nuclear phase-out in no time at all. For the heads of the energy companies, this means dismantling old nuclear power plants, renovating existing plants and new power plants to compensate for this. From an economic point of view, the unpredictable investments had to be made as forward-looking as possible. In another scenario, subsidies for coal-fired power plants were removed, leading to a sudden increase in production costs. In both scenarios, the expansion of wind power and photovoltaic systems slipped into focus, as they have very low running costs.

All-round interaction
Multiple factors had to be analysed and correctly interpreted for the survival and growth of the company. Most of the teams were able to drive their business forward. Others, however, had to fight for customers and were saved by emergency loans from banks. A certain emotionality, a desire to win and a willingness to learn accompanied the game to the end.