As part of the decarbonization study, the Feuchtwangen campus, together with the Feuchtwangen municipal utilities and Siemens AG, conducted a survey last November for a CO2-neutral energy supply in the future. Among other things, the survey asked about the current condition of buildings, energy consumption and the energy sources used, as well as mobility.

Around 3/4 of the responses are from the urban area, and the majority (92%) are from owners. The single-family house accounts for the largest share at 62%, followed by the multi-family house (20%), the semi-detached house (10%) and the terraced house (8%). A good third of the buildings were built before 1970. Double- or triple-glazed windows are standard. Just under half have had their roofs or ceilings insulated, and around 1/4 have had their exterior walls insulated.

The top 3 energy sources listed for existing buildings are natural gas, heating oil and wood. The latter is often used for additional fireplaces. The heat pump is currently in fourth place and will play an important role for many, especially in the future. The respondents also rate green gas and hydrogen as energy sources of the future. Against the current backdrop, attitudes toward natural gas are also likely to have changed once again. 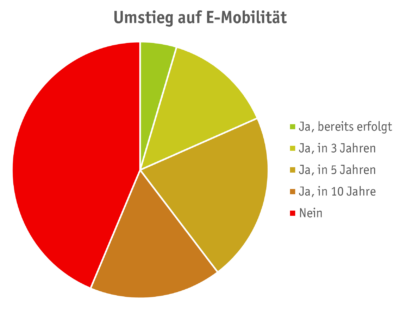 The picture is also likely to continue to change when it comes to e-mobility. At the time of the survey, around half had already made the switch or were planning to do so within the next few years.

A large proportion expect heating costs to rise in the future. Price stability is important to many. Other factors are less important.