Skip to content
Blueprint for the energy future in Germany

Blueprint for the energy future in Germany 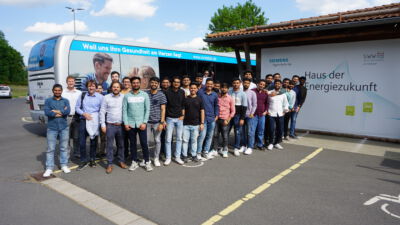 On May 18, the Smart Energy Systems students of Feuchtwangen set off on an excursion to the Fichtelgebirge. Stopping in Käferbach and Ansbach, the students went to the Franconian town of Wunsiedel.

As part of the lecture “Virtual Power Plants”, the energy park of the Wunsiedel municipal utility was visited. For several years now, the park has been focusing on the consistent use and expansion of renewable energies and sustainable technologies: solar and wind energy, wood and residual materials as renewable raw materials and energy sources combined with modern combined heat and power (CHP) plants. 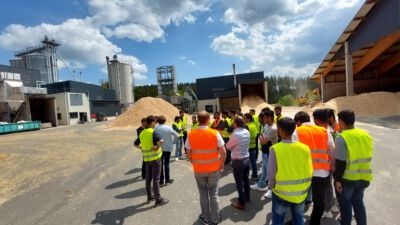 In a large combined heat and power plant, the first step is to generate electricity from biomass such as tree tops and landscape maintenance material. In contrast to large power plants, the resulting waste heat is not released unused into the environment via gigantic cooling towers, but is supplied to the neighboring pellets plant for drying processes. This in turn uses wood waste from the numerous surrounding wood-processing companies as raw material. Electricity generated that cannot be fed directly into the grid or surpluses from photovoltaics (PV) and wind power are temporarily stored for a short time in the 8.4 MW power storage facility, the most powerful in Bavaria.

Another part of the comprehensive overall approach to the use of regenerative energy sources is green hydrogen (H2), generated for example from photovoltaics (PV) and wind power. The completion of the pioneering electrolysis plant for the production of CO2-free hydrogen at the energy park is planned for this year. 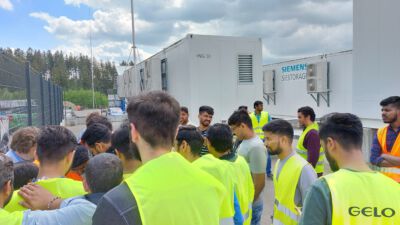 “With an electrical connected load of the electrolyzer of 6 MW in the first expansion stage, it is one of the largest of its kind and thus has a model character for the whole of Germany. The planned PEM hydrogen production plant will convert the existing renewable energy into a storable medium and make it available for various applications in mobility and industry. Thus the efficient coupling of the individual sectors succeeds here” reminded Dr. Rainer Saliger. The expert for decentralized energy systems had already explained the Wunsiedl concept in advance as a guest lecturer in the lecture and was also involved in the decarbonization study for Feuchtwangen. 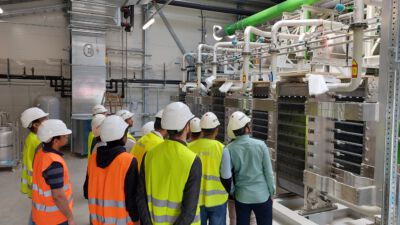 Sector coupling refers to the networking of the subsectors of the energy industry. Traditionally, these are electricity, heat supply, transport and industry, which up to now have been viewed largely independently of one another. The focus here is on the holistic approach.

By storing electrical energy locally, e.g. in battery storage systems or by converting it into hydrogen, a supply can be created for times of low supply. If the systems are sufficiently dimensioned, generation surpluses from rural areas can reliably supply the cities with energy.

Campus director Prof. Dr.-Ing. Jungwirth concludes at the end of the excursion: “With its pioneering role, Wunsiedel provides the blueprint for our energy future in Germany and could also serve as a model for Feuchtwangen.”