Skip to content
How strong is the performance of current wallboxes?

How strong is the performance of current wallboxes?

Model comparison in the new Wallbox Testlab at the Campus Feuchtwangen

With a wall charging station, or wallbox for short, electric cars can also be charged quickly, conveniently and safely at home. But which wallbox is the best for private use? Which smart functions are available and which do I personally need? Can the wallbox be exposed to the weather? What charging power do I need? Which wallbox has the best price-performance ratio?

These are precisely the questions we asked ourselves at the Campus Feuchtwangen and launched the Wallbox Testlab. There are currently six wallboxes installed at the campus, which differ significantly in terms of functionality, price and appearance. 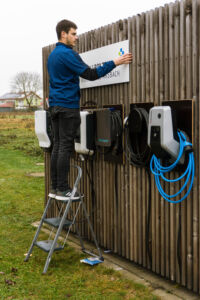 The maximum charging power of such a private wallbox is 11 or 22 kW. It should be noted that the 22 kW variant requires approval from the network operator. The common 11 kW variant, on the other hand, is only subject to registration. It is easier to integrate into the existing infrastructure and, with a range of approx. 50 km per hour, can still be charged sufficiently quickly.

“When selecting the functions of a wallbox, you first have to think about your personal requirements. Of course, all models offer the basic charging function. If a photovoltaic (PV) system is already available at the home or it is planned to purchase one, then the PV charging function, for example, makes ecological as well as economic sense. With this function, the electric car can be charged specifically with self-produced solar power,” explains Thomas Haupt, research assistant at the Campus.

The aim of the new test lab is to compare different models in terms of operation and suitability for integration into a smart home. To do so, the wallboxes are to be intelligently networked with the PV system and various electricity storage systems.

“The integration of the wallbox into the building technology is an important step towards a smart energy system, i.e. an intelligently networked energy system. To control the wallbox and read out measurement data, some models already have mobile phone, LAN, WLAN, Bluetooth and Modbus interfaces. In addition, some wallboxes offer access control via key switches or RFID chips. This protects against unauthorized charging, but is of secondary importance on private property. Built-in electricity meters are primarily intended for apartment buildings and are used for billing purposes. The added value of an optional load manager is also only available when multiple wallboxes are installed, which can prevent grid overload in the respective building.” 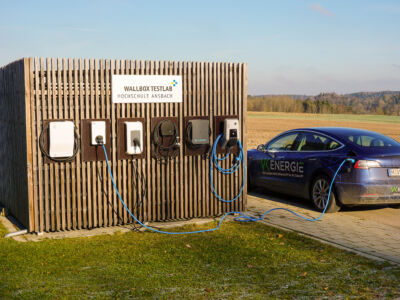 In the future, the Wallbox Testlab will be used for research and teaching purposes in the field of energy and building technology as well as smart energy systems.

In the long term, the Wallbox Testlab will be expanded to include new wallbox models, which will then also be analyzed. With the “bidirectional charging” function, which has only been available in individual pilot projects so far, the electric car will become a home storage system in the future, thus opening up new, exciting potential.

Interested citizens will also be able to charge their electric cars free of charge on a one-off basis. The prerequisite for this is that the charging curve for the respective model is recorded and that the data may be used for future work on the campus. The wallboxes are also freely accessible at all times as demonstration objects in the outdoor area.